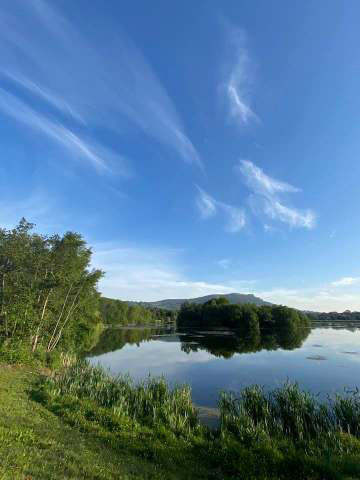 You may be quite sure of this, that if the householder had known at what time of the night the burglar would come, he would have stayed awake and would not have allowed anyone to break through the wall of his house (Mt. 24:43).

I have never been happy with the notion of heaven as sleep nor taken much comfort in the prayer, “Eternal rest grant unto them, O Lord.” Paradise as a place of eternal rest makes me think irreverently of mattress advertisements. I sometimes wonder why the idea of rest has settled so firmly into the collection of metaphors we use to refer to eternal life.

These are thoughts I’ve been revisiting as I meditated recently on the text of Matthew quoted at the beginning of this post. When we think of death – if we think of death (mostly we try to avoid doing so) – it is hard to view it with anything other than dread: that moment when we are wrenched out of this painful, but familiar, existence where we are at home, and bundled into the next life – a life of which we have no first-hand knowledge. In this parable, the Lord himself brings up that subject we would rather avoid and refers to himself as the “burglar.” He can only be doing this to try to help us to view our death in another light. What is he trying to tell us?

If we are frequent readers of the gospels, this burglar image may have lost some of its freshness and originality for us. But think about it. That the eternally sinless Son of God should use the metaphor of a thief to describe himself is, along with being slightly humorous, also very unconventional. But, if we decide to take his word for it and think of him for a moment as the thief, then what – or who – is the loot? Well, us. We are what he wants to steal. And his desire for us is so intense that he likens himself to the lawless burglar, who just wants what he wants what he wants, and whose method is therefore to snatch and run with the goods.

But, if we had been awake, the parable implies, we might have prevented this theft. I think the Lord may be employing the literary device of irony here. We cannot, in this life, be ‘awake’ enough to prevent this robbery. He will come. We will die. That is a certainty. But, in light of this parable, in no way is death to be seen as a descent into ‘sleep’. On the contrary, the parable makes me think of my death in terms of the chase scene in a film about a diamond heist, with the Lord as its great mastermind. And he speeds away with the diamond, leaving his pursuers far behind. And the diamond is…um… me. Although I am not quite sure a diamond is a suitable metaphor for me, I can hardly sleep through such a heist.

The Lord’s words about staying awake, then, encourage us to think about what ‘being awake’ actually means. It strikes me that being awake, as we experience it in this life, has degrees. Awake as the mere opposite of being asleep is perhaps the lowest degree. A bit higher is the idea of conscience: keeping our conscience always awake so that we never depart from the way of virtue. Better. But not the best. How about this as the highest level: the experience of love? Don’t we feel most deeply awake when we love deeply? This deep love awakens parts of our being that had previously been asleep and that we didn’t even realise we had. This must be the key to understanding heaven’s type of awake-ness.

So, for me, the Lord’s words about being awake are inseparable from the experience of love. Love will open us up as it wakes us up in heaven when God surrounds us and we are filled with his loving life, when we see with his eyes and love with our hearts perfectly attuned to his own heart. We do not know the hour when the ‘burglar’ will break in, snatch us, and wake us up to eternal love. Indeed, we cannot know when. But we can know something about what, about heaven’s fulfilment. We can know something – not everything, but something. We know it, even now, when we are awake in love.