Home » The Foundation of Minster Abbey

St Domneva and The Foundation of Minster Abbey 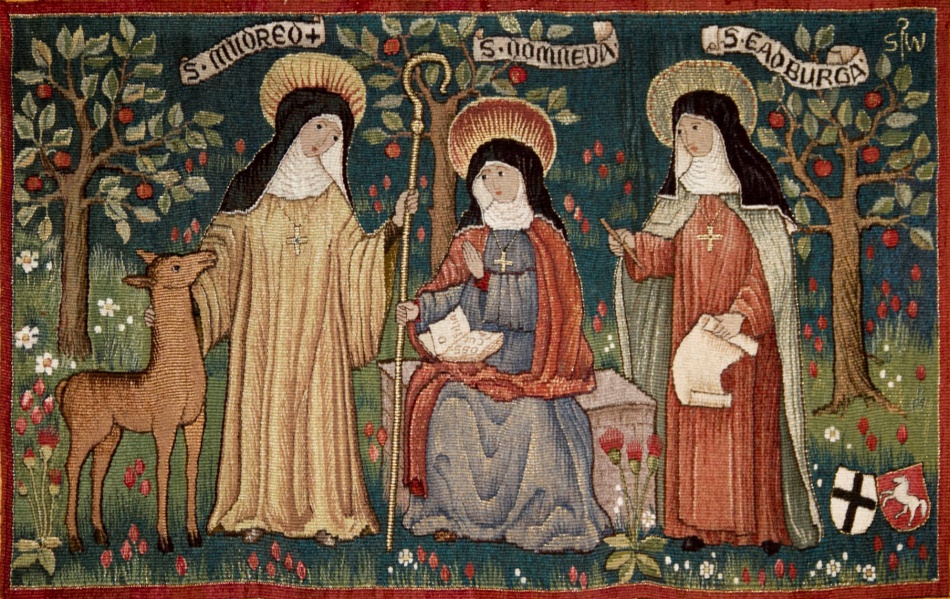 Saint Domneva (Domne Eafe or Lady Eva) founded Minster Abbey in 670 AD. She was the great-granddaughter of King Ethelbert of Kent, the ruler who with his wife Bertha welcomed Saint Augustine on his mission to the Anglo-Saxons.

Domneva had married Merewalh, son of King Penda of Mercia. Merewalh was King of the Magonsaetan (the land around Hereford). They had 4 children, a boy who died young and three girls. It’s not known exactly when Merewalh died, but when a family drama unfolded Domneva returned to Kent.

The details of the foundation of Minster Abbey are found in several medieval texts of the Kentish Royal Legend.  Domneva’s two brothers Ethelred and Ethelbert were still young and in the care of their uncle King Eorcenbert of Kent. He cared for them well. However, following his death, his son (their cousin) Egbert became King. King Egbert and his advisor Thunor began to worry about the dynastic implications of having two possible rivals and as a result the two innocent boys were murdered.  As their nearest relative, Domneva was offered ‘wergild’ (blood money paid as restitution for their lives). Instead, Domneva requested land to found a monastery on the Island of Thanet. The legend states that she asked for as much land as her pet deer could run around in a day. Hence the deer became a symbol of Minster and Domneva and her daughter Mildred are often pictured with a deer.  The first monastery was constructed on the site of the present parish Church of St. Mary the Virgin in Minster, situated just a few hundred yards from Minster Abbey.

LIFE AT MINSTER ABBEY IN THE EARLY DAYS

The second Abbess of Minster was Mildred, the daughter of the foundress Domneva. She had been educated at the monastery of Chelles in the north of France and on returning to England had entered the monastery at Minster, where her mother was Abbess. Domneva died around the year 690 and was soon venerated as a Saint (Feast Day 19th November). 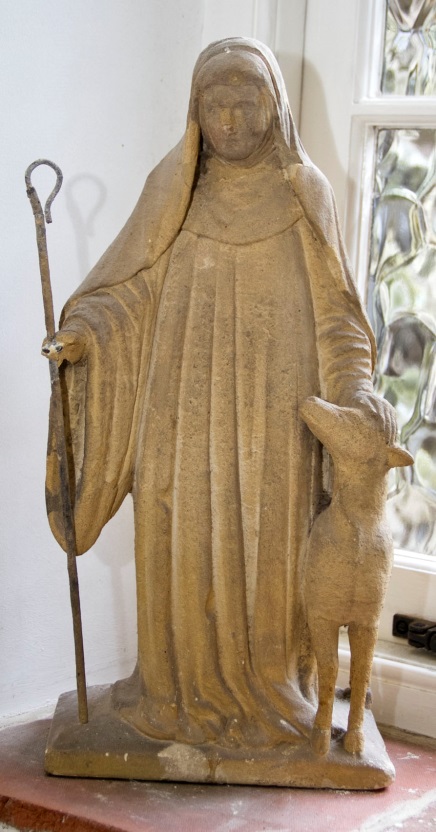 Mildred was consecrated Abbess of Minster by St Theodore of Canterbury. Mildred, whose name means ‘peaceful counsel’, led her community with wisdom and love for more than 30 years. She was renowned during her lifetime as a peacemaker and was especially close to the poor.

Mildred died about 725. Soon after her death people started coming in pilgrimage to her tomb. Miracles of healing were reported and the veneration of St. Mildred spread throughout Southern England and across Europe. Her feast is kept on 13th July.

The community had grown and it was felt that a bigger building was needed. So under the 3rd Abbess, Edburga, the community moved to the site of the current monastery in 741, just a few hundred yards from the site of the original monastery. (The present St. Mary the Virgin Church).  The monastic buildings were probably constructed of wood or wattle like most Saxon buildings, but the monastic church was built of stone. It was dedicated to SS Peter and Paul by Archbishop Cuthbert of Canterbury. Edburga had the relics of St Mildred brought from St Mary’s Church and re-interred behind the altar of the new church. In the 1920’s an archaeological dig uncovered the foundations of this church.

During the time of Abbess Edburga several monks and nuns left England to spread the Gospel in Europe. One of these, St Boniface, corresponded with Edburga and she supported his missionary work in Germany  by sending him gifts of manuscripts.

Several of the Anglo-Saxon missionaries who set sail for the continent did so from Minster. St Lioba (originally from Wimborne Abbey in Dorset), who became a co-worker with St Boniface, refers to her “dearest mistress Edburga” in her letters.

Edburga died in 751 and was buried in the monastic church she had built at Minster. She too is venerated as a saint. Her feast is kept on 12th December. 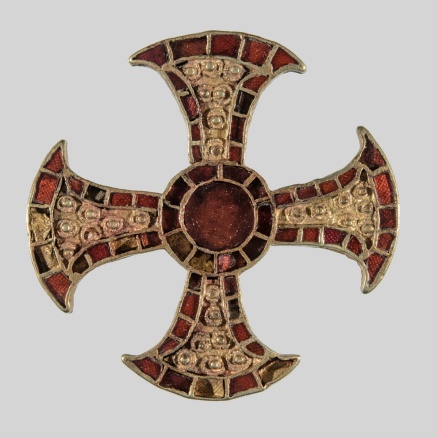 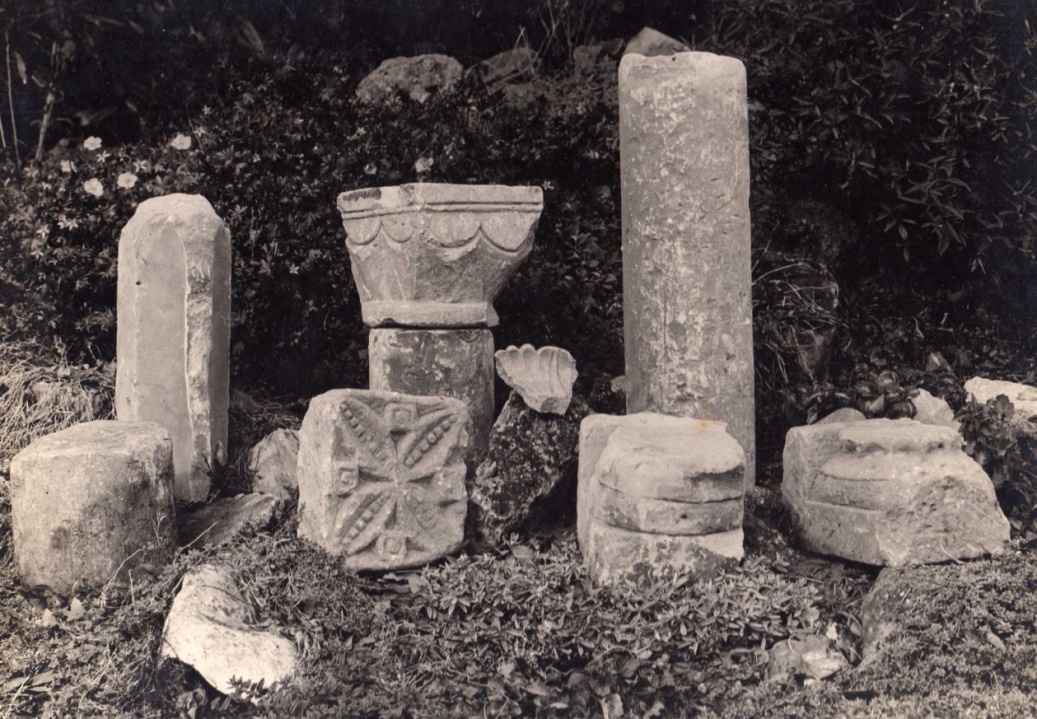 During the time of the 4th Abbess Sigeburg, the Vikings began to raid the South-East of England. According to the Anglo-Saxon Chronicle the Isle of Thanet was repeatedly attacked and plundered. The first recorded invasion was in 753, and Viking raids were to continue to plague the country for more than two centuries. Several times the community of nuns and the villagers crossed the Wantsum to take refuge in the fortified city of Canterbury – to return and rebuild Minster when the immediate danger had passed. However, when Canterbury fell to the invading Danes at the end of the 10th century the traces of the Minster community of nuns were finally lost and the monastery lands lay deserted. 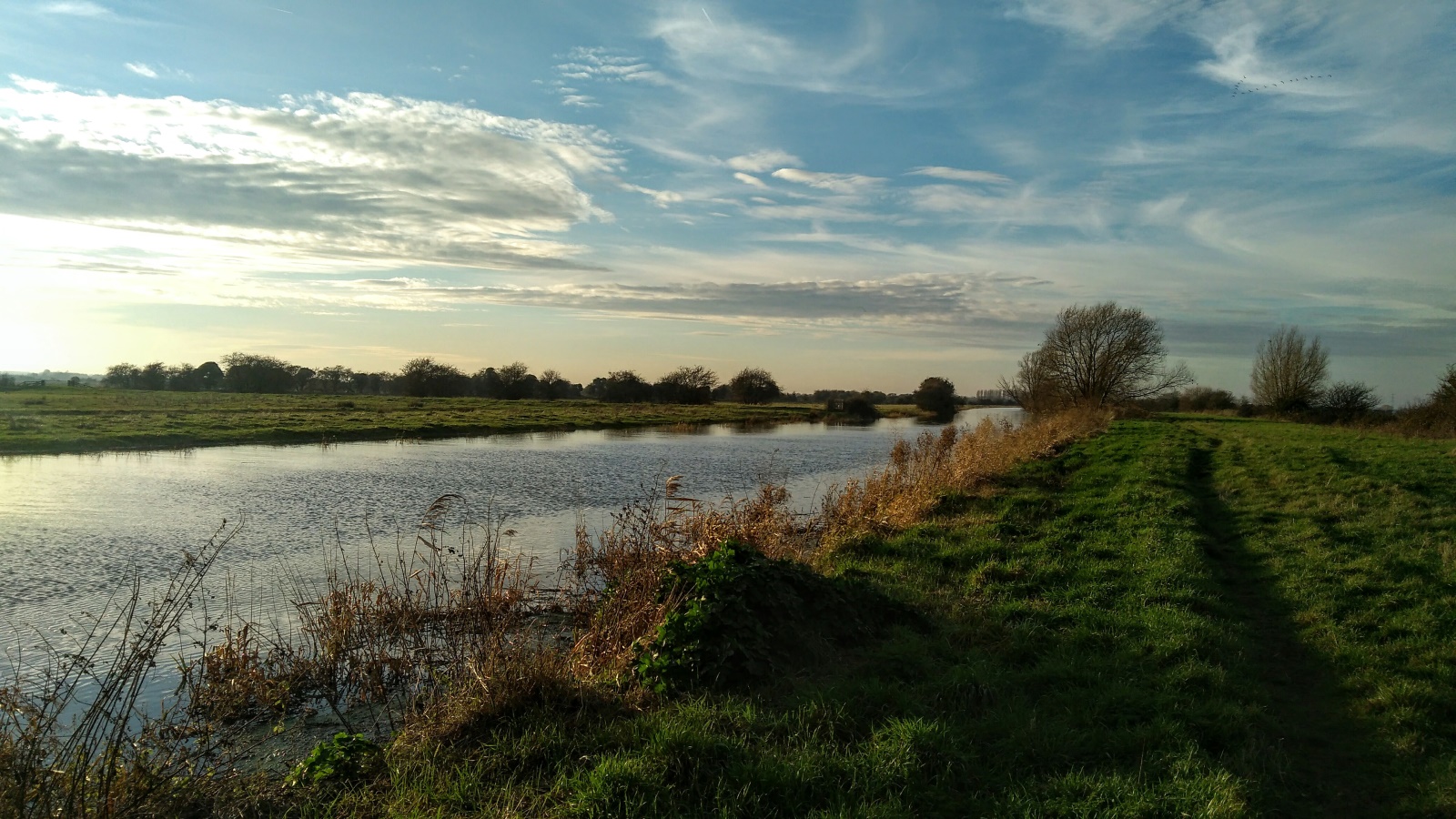 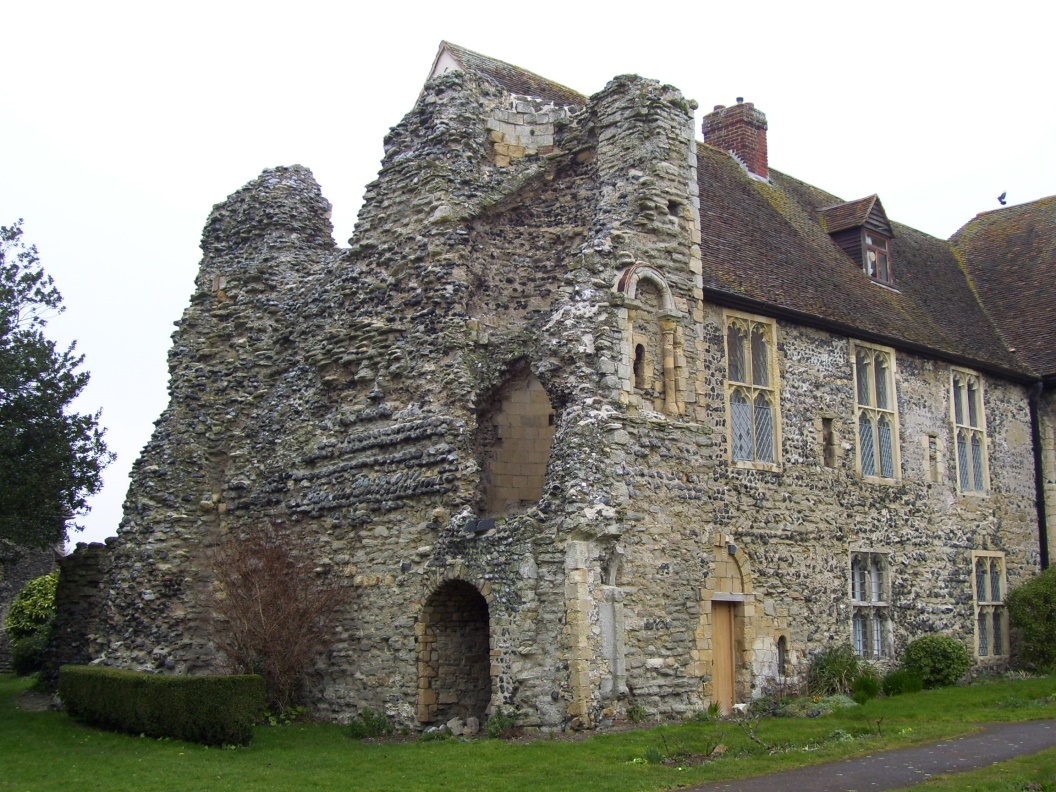 Barely a generation later, in 1027, the monks of St Augustine’s Abbey in Canterbury petitioned the Danish King Canute (1017-1035), now king of the South-East of England, to grant the property in Thanet to the monks. With his permission they built a small grange or courthouse on the site as a residence for those who were to administer the estate; the name Minster Court dates from this time. 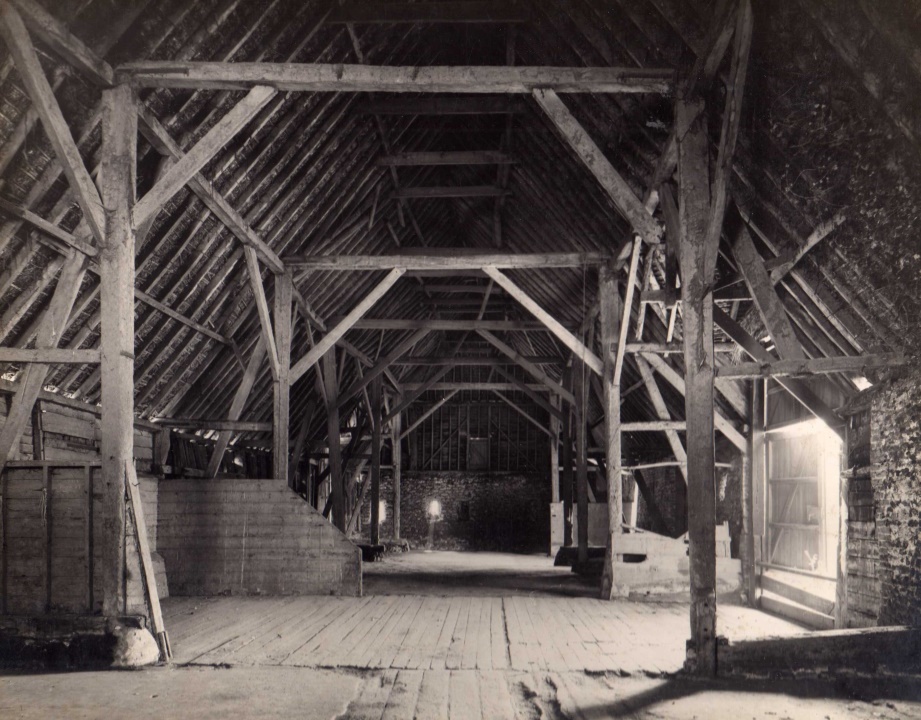 A listing in the Doomsday Book of 1088 shows that with the grange at Minster the abbots of St. Augustine held great tracts of arable land on Thanet. In the 12th century a vast tithe barn was erected for the collection of the grain grown on monastery lands. These supplies were used for St. Augustine’s monastery, the pilgrims’ hospice in Canterbury and the leper hospice at St. Nicholas Harbledown. The monastery also had two salt-works on the marshes. During the 13th century the ‘Abbot’s Dyke’ was constructed to prevent flooding of arable land. 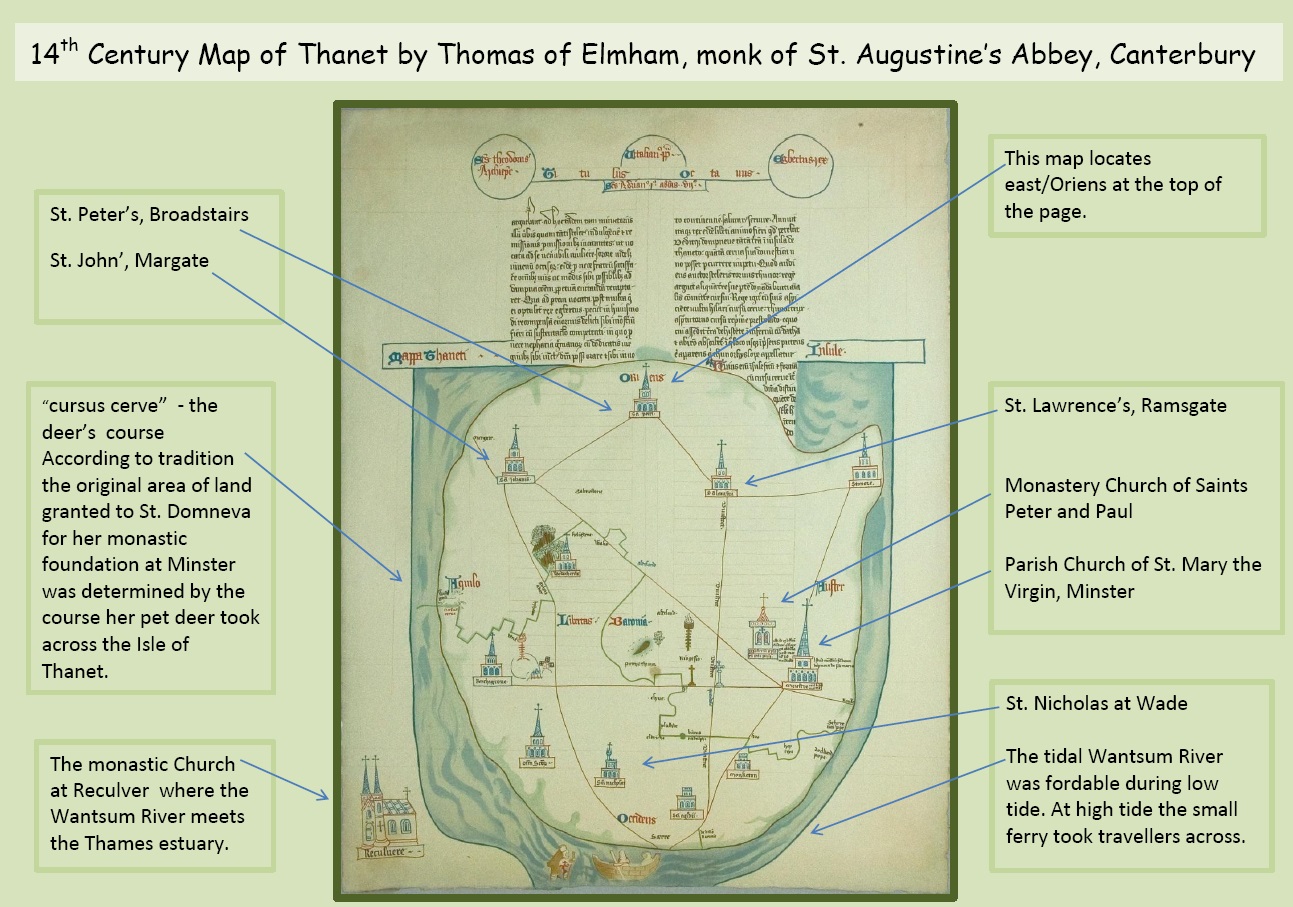